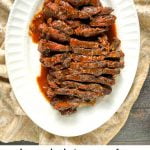 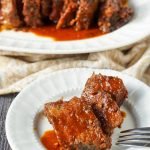 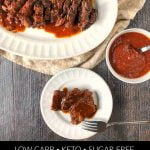 If you love barbecue you have to try this slow cooker beef roast that’s cooked all day in a low carb bbq sauce.  Just mix up the keto bbq sauce and use half to cook the pot roast in and use the rest for a dipping sauce. This is another easy low carb dinner that your family will love. Each serving has only 2.6g net carbs.

I’ve been wanted to make this bbq beef roast for a long time. I remember my next door neighbor growing up making a bbq brisket for us and I thought it was so delicious. That was my inspiration for this slow cooker bbq beef roast for which I had to come up with a low carb bbq sauce recipe.

The sauce is thick and spicy which worked perfectly with the chuck roast. I cooked it down all day and then just sliced it for dinner. However you can also shred it to make shredded bbq beef. Either way is easy. Let’s go make some bbq.

I have a lot of ingredients in this low carb bbq sauce but they are pretty common ingredients you will have in your pantry. The only unusual ingredient is that I used Swerve brown sugar sweetener. It’s become a pretty popular product and you can probably find it in a bigger grocery store.

To make this keto sauce, I whisked all the ingredients in a small pan and cooked it down for about 5 minutes. It gets nice and thick. I would recommend tasting it at this point and if you want it sweeter, add more Swerve brown sugar or if you want it hotter, add more pepper flakes.

Making The BBQ Beef Roast In A Slow Cooker

Once the sauce is done, take half of it and brush it over the roast. Then flip the roast and brush that side with the sauce. Refrigerate the leftover bbq sauce for later. Place the lid on the slow cooker and cook on low for 8 hours. The cooking time will depend on your particular slow cooker but roughly 8 hours on low or 4 hours on high.

Once it’s done, take out the roast and place it on a platter. Slice it and set it aside. Take the liquid from the slow cooker and add it to a pan. Bring it to a boil and then simmer for 5 minutes or so to thicken it. Then pour it over the beef roast.

Alternatively you can turn up the heat on the slow cooker once you take out the roast and let the sauce boil in there. It might take longer though.

How To Make Shredded BBQ Beef In The Slow Cooker

I intended to slice this beef roast but if you prefer shredded bbq beef this is how I would do it. Initially cut the beef roast into big chunks and then mix it in half of the low carb bbq sauce. Cook for 8 hours on low heat in the slow cooker.

After cooking it should be soft enough to shred with two forks. Let it sit in the liquid and absorb it for a few minutes.

This low carb barbecue sauce recipe makes a good bit. So you can either use it for the roast or save it for another time. It should keep in the refrigerator for a few weeks.

The nutritional information for 1 serving is: