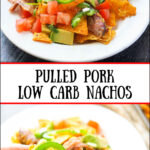 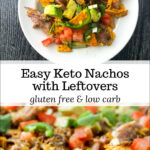 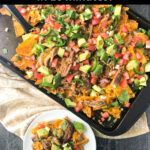 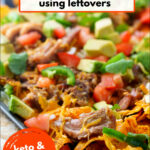 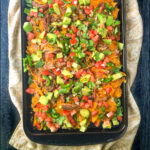 Try these keto nachos with leftover pulled pork for a quick dinner or low carb appetizer for guests. Using keto tortilla chips you can load your nachos with a large selection of low carb toppings. Just make some pulled pork roast for dinner and then have pulled pork nachos the next day! One serving of these low carb high protein nachos has 4g net carbs and 34g protein!

While I was on vacation, my sister made a delicious batch of nachos with leftovers and it made me want to make a low carb version when we got home.

So the other day I made my zesty pork shoulder roast for dinner which makes plenty of leftovers.Then I made these keto nachos with leftover pulled pork the next day.

It was so good for a low carb lunch or dinner! Of course this would also be a great way to use leftover shredded chicken too.

What kind of low carb tortilla chips to use?

I wanted to try to make these as close to real nachos as I could and of course the biggest obstacle was the tortilla chips. So I found these Quest protein chips and was surprised at how good they were!

However I could only find them in a small size (1.1 oz) package so I used 3 or 4 bags and they were a bit expensive.

There are other brands of low carb tortilla chips you can try as well as other food items you can use as the base and I have few ideas for you below.

Other ideas you can use in place of chips when making low carb nachos.

Here are some other ideas for a low carb nachos base.

Remember too that you could just make the meat and add toppings on a big baking tray. Then eat it with a fork. Or make nacho bowls without the chips.

How to make keto nachos with leftover pulled pork.

First make the pulled pork. I really like my zesty garlic pulled pork recipe for making tacos, burritos, salads and these nachos.

You can add anything you want to your keto pork nachos. I chose fresh roma tomatoes, green onions, avocados, a fresh jalapeno and cilantro leaves. Below are the carb counts for common nachos toppings you can try.

Note: I used Roma tomatoes because they are not as watery as regular tomatoes. Also I used a fresh jalapeno pepper which is so delicious on nachos. Just make sure to clean out the seeds and ribs if you don’t want the heat. Also slice them very thin though I was in a hurry and didn’t.

You can also try my husbands famous pickled jalapenos. He grows them in the summer, pickles them and we eat them all year round. It’s a great recipe.

You can use pulled pork to make a lot of different low carb recipes. Try these bbq stuffed poblanos or these lettuce wraps.

It would also be great in a keto burrito bowl or on these cheese chip nachos. And if you are not into low carb, you use it for pork tacos, burritos or quesadillas.

Well next time you make or eat pulled pork, I hope you make a big batch of keto pork nachos the next day. It’s a great way to use leftovers and makes for a fun meal! Enjoy.

Of course this would also be a great way to use leftover shredded chicken too!