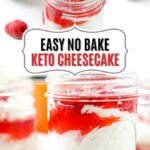 This raspberry no bake keto cheesecake is a delicious low carb dessert that is easy to make and satisfies your cravings for cheesecake. This sweet keto snack has only 5.7g net carbs per serving.

[Updated] This recipe is more of a recipe redo or makeover. A long time ago I made a low carb no bake cheesecake that has become very popular on the  interwebz. Since then I’ve been working on my photography and wanted to remake it so I could take new pictures. Well that got me to thinking.

I decided to try to bring the carb count down as well. The original recipe is very good but also very filling. So I did some tweaking and came up with a new and improved raspberry keto no bake cheesecake that I think you will like.

How I Lowered The Carb Count

About The Sugar Free Syrups

A note about the syrup. I used Torani sugar free raspberry syrup. I don’t know if you have ever used these syrups but they are fantastic. You can find them at coffee houses, Amazon or sometimes Walmart. They have a huge variety of flavors (regular and sugar free) on their website so I just buy mine there.

Right now I have over 20 bottles. They last forever and you can use them in  coffee, tea, alcoholic drinks, smoothies, baked goods, ice cream and many more recipes. I have over 40 recipes using Torani sugar free syrups.

Check out this no bake keto cheesecake from my friend Jessica!

I’ve made a lot of variations of this no bake keto cheesecake because to be honest it’s easy and tasty. I hope you like them as much as we do. Enjoy!

If you have a problem with nuts, try my friend Sara’s nut-free keto cheesecake.