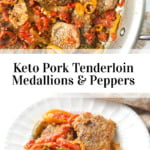 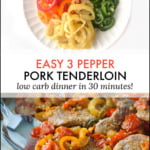 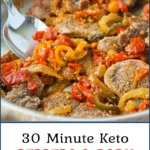 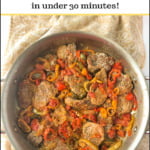 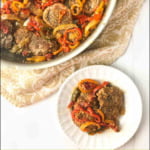 A simple but tasty recipe, this 3 pepper pork tenderloin medallions is an easy skillet dinner you can make in under 30 minutes. Tender pork medallions and spicy peppers make for a delicious low carb dinner any night of the week.  Only 5.3g net carbs per serving.

We love peppers in this house. Well my hubby and I do that is. He has a variety of peppers planted in his garden this year and I can’t wait to see what I can make with them.

So when I was asking him what I should make for dinner the other day he suggested some thing with peppers and onions and so I came up with this 3 pepper pork tenderloin medallions skillet dinner.

I use a mixture of hot, sweet and pickled peppers and thin pieces of pork tenderloin for an easy and tasty low carb dinner. This was a delicious recipe and now one of my favorite recipes for summer since I can use my hubby’s garden peppers!

The Difference Between Pork Tenderloin And Pork Loin.

In this recipe I am using pork tenderloin which is much different from pork loin.

What Type Of Peppers To Use?

In this recipe I used sweet bell peppers, a jalapeno and some pickled banana peppers. So you can see there was a little heat.

This summer I think I would like to use some ancho chiles or pobalno peppers in the mix because I like their taste but if you want you can use whatever peppers you want. It will be perfectly fine with just sweet bell peppers.

Other recipe ingredients were grape tomatoes, garlic, broth, olive oil and parmesan cheese. You could also use some red pepper flakes to add more heat if you want.

How To Make Pork Tenderloin Medallions With Peppers.

Low Carb Side Dishes To Serve With This.

Pork tenderloin is fine to cook as a roast but I like to cut it into pieces and pound them into thin, tender pork medallions. I’ve made quite a few recipes with it prepared like this and my family loves it.

I hope you like this simple but tasty weeknight dinner. You can make this dish in just about 30 minutes so it’s a quick dinner and ow carb too! And if you don’t care about carbs, onion and mushrooms would go great with the peppers.

My hubby and I ate it as is but if you don’t care about carbs you can eat it over rice or pasta or with roasted potatoes.

Notes: If you don't care about carbs onion and mushrooms would go great in this skillet dinner. You could also add some red pepper flakes to add more heat.