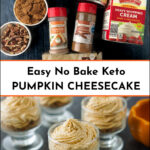 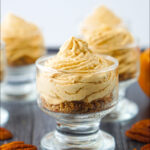 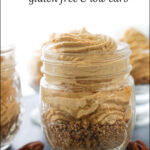 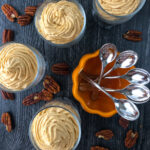 I have a lot of pumpkin recipes on the blog because pumpkin adds flavor, thickness and nutrition a recipe. This keto pumpkin no bake cheesecake recipe is of my most popular recipes.

It’s great for the fall and winter and especially if you want a dessert around the holidays and are on a low carb diet. It super easy and sure to be family favorite so give it a try! Remember this no bake dessert takes minutes not hours to make!

Other keto pumpkin recipes to try.

(Please note this post has been updated from the original 6 years ago). Since then I have made quite a few pumpkin recipes on this blog. But for starters check out this 9 low carb pumpkin recipes post to see some of my favorites.

The simple ingredients I used for this no bake pumpkin cheesecake are:

Note that I used raw pecans for the crust, however you could use walnuts, almonds or a combination of any of these. If you don’t have any raw nuts, another option is to use almond flour and melted butter to make a no bake almond flour crust.

No need to bake it. The butter will keep the almond flour together. I prefer the taste of raw nuts though.

What size jar should I use?

The last time I made this recipe I used 4 of these 8 oz jars pictured below but to be honest they were too big. This keto dessert is very rich and I think it would be better if you made it into 8 smaller desserts.

So this time I used some 3.5 oz glass dessert dishes pictured below that I bought at a discount store. The closest ones I could find similar to these are these glass dishes on Amazon.

Using a smaller container you can get 8 servings from this recipe which is more appropriate.

There are also plastic containers you can buy at the dollar store that would work, these 4 ounce mason jars or these small ramekins and it would be the perfect serving.

How to make keto no bake pumpkin cheesecake.

Step 1: First you want to make your nut crumb base. Just add the crust ingredients (nuts, sweetener and cinnamon) to your food processor. I used all raw pecans this time but sometimes I add walnuts.

For the sweetener I use either Swerve brown sugar sweetener or Lakanto monkfruit sweetener but you can use your sweetener of choice. Grind or pulse until it starts to get moist and crumbly.

Step 2: Divide the mixture between all of your containers and press to make a pseudo pecan crust. Since I used the small glass containers I divided it between 8 containers.

Step 3: Add the cream cheese, pureed pumpkin, pumpkin spice, cinnamon and sweetener to your mixing bowl and using an electric mixer beat until creamy. Then add your cream and beat for about 5 minutes until the mixture has a light and fluffy texture.

Add the cream cheese, pureed pumpkin, spices and sweetener to your mixing bowl. Using an electric mixture beat until creamy. Then add the heavy cream and beat for about 5 minutes until the mixture has a light and fluffy texture.

Step 4: Spoon your cheesecake mixture into each container. Top with a few nuts and a sprinkle of cinnamon if you want. Cover with plastic wrap or store in an airtight container and refrigerate until you are ready to eat.

(Please scroll down to view and read the recipe card.)

If you want to make your own whipped topping, just add some heavy cream and sweetener to a mixing bowl and beat until stiff peaks form.

That’s it folks. Easy peasy lemon squeezy. I hope you give these keto sweet treats a try because it’s super easy and tasty and best of all this no bake recipe only takes about 15 minutes!

You can find most of the ingredients on my Amazon page if you are interested.

Note that I used raw pecans, however you could use walnuts, almonds or a combination of any of these.