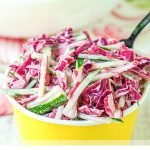 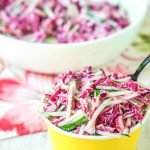 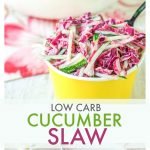 This cucumber slaw with margarita dressing is a delicious low carb salad that would be perfect for your next bbq or picnic. A delicious way to use some of those garden cucumbers! The low carb creamy dressing has the sweet and tart taste of a margarita.

My husband’s vegetable garden is starting to crank out some produce and that means it’s time for me to come up new vegetable recipes. He just presented me with his first batch of cucumbers and while I love cucumbers, I don’t eat that many.

So while watching the next Food Network Star a contestant made margarita dressing that sounded interesting to me. I decided to try my hand at that and made this cucumber slaw with margarita dressing. It’s cool, crunchy, colorful and the dressing is creamy and sweet but tart. You will love it!

Now that I think about it, I heard of that dressing on the comeback kitchen. I’m not sure what she put in it but when I think of margaritas I think lime and salt. And because this is a slaw dressing it had to be creamy too.

So this dressing is simply lime juice, mayo, salt and sweetener. No tequila though I imagine if you loved that taste, you could work it in there. But my version is just these 4 simple ingredients.

The Difference Between Slaw And Coleslaw

I found an interesting article on this topic on Chowhound. The term coleslaw is a dutch word (koolsla) in which kool means cabbage and sla means salad. That was back in the 1700s and mayonnaise came into the picture later on. So technically this is a coleslaw since I used red cabbage. However any salad made of chopped vegetables would be termed a slaw

Every year we are inundated with a lot of garden cucumbers so here a few other great cool cucumber recipes to try. I have a bacon, tomato, ranch cucumber salad and a lemon ginger Asian cucumber salad for you. And another way to use cucumbers is topped with a creamy cheese spread like this creamy herb cheese or with this pecan and bacon goat cheese ball. All are very summer worthy cucumber recipes.

This is very simple, so I just chopped my red cabbage very thinly and then used my julienne peeler to make the cucumber sticks. For the dressing, whisk mayo, lime juice, salt and Swerve sweetener and toss the salad.

NOTE: You can make this a head of time but don’t add the  cucumber until you are about to serve it. The cucumbers have a lot of water in them and might make it watery. So you could make this the day before but just add the cucumbers right before serving.

Well I hope you enjoy some of these garden cucumber recipes. I’m sure I will have more this summer as they just started rolling in from the garden. And if you have any you want to share with me, please let me know in the comments! The nutritional information for 1 serving is:

1 tablespoon of the dressing has 0g net carbs! 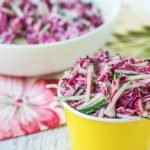 This cucumber slaw with margarita dressing is a delicious low carb salad that would be perfect for your next bbq or picnic. A delicious way to use some of those garden cucumbers! The low carb creamy dressing has the sweet and tart taste of a margarita.