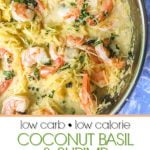 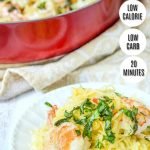 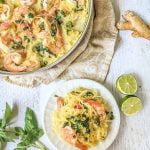 If you are a looking for a wonderful Thai flavored noodle dish, look no further. This coconut basil shrimp spaghetti squash recipe is full of flavor, low carb, gluten free and only takes about 20 minutes to make! Each serving has only 169 calories and 4.3g net carbs so it’s a delicious and healthy dinner idea! 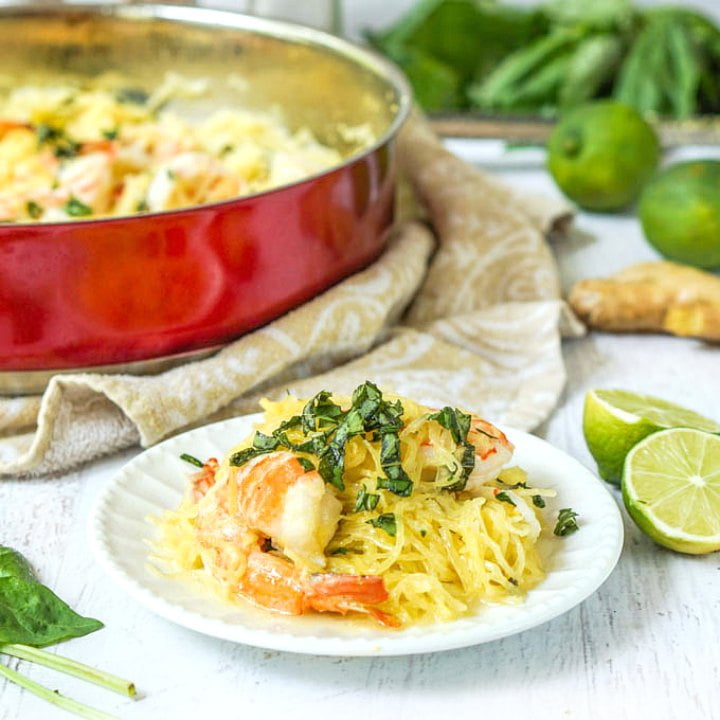 I’m finally winning my husband over with spaghetti squash. I started out with just butter & garlic and I loved it but he was just “meh” about it. However this coconut bail shrimp spaghetti squash dish is the one that won him over.

It was so simple but the Thai flavors are what really hooked him … and me! It only takes about 20 minutes start to finish and has 169 cals and 4.3g net carbs!

How To Cook Spaghetti Squash

I now cook spaghetti squash in my Instant Pot. So if you have one or a pressure cooker I suggest using one of these to cook your spaghetti squash. The reason is that I can cut up 2 spaghetti squashes in halves and put those 4 halves along with 1 cup of water and cook on manual for 5 minutes. Then quick release and they are done. Easy peasy.

However you can also cook them for about 10-12 minutes in the microwave until fork tender. I like the Instant Pot way better because I can get the 4 halves in the pot where as I can only do 2 halves at most in the microwave. You can also roast them in the oven if you want. 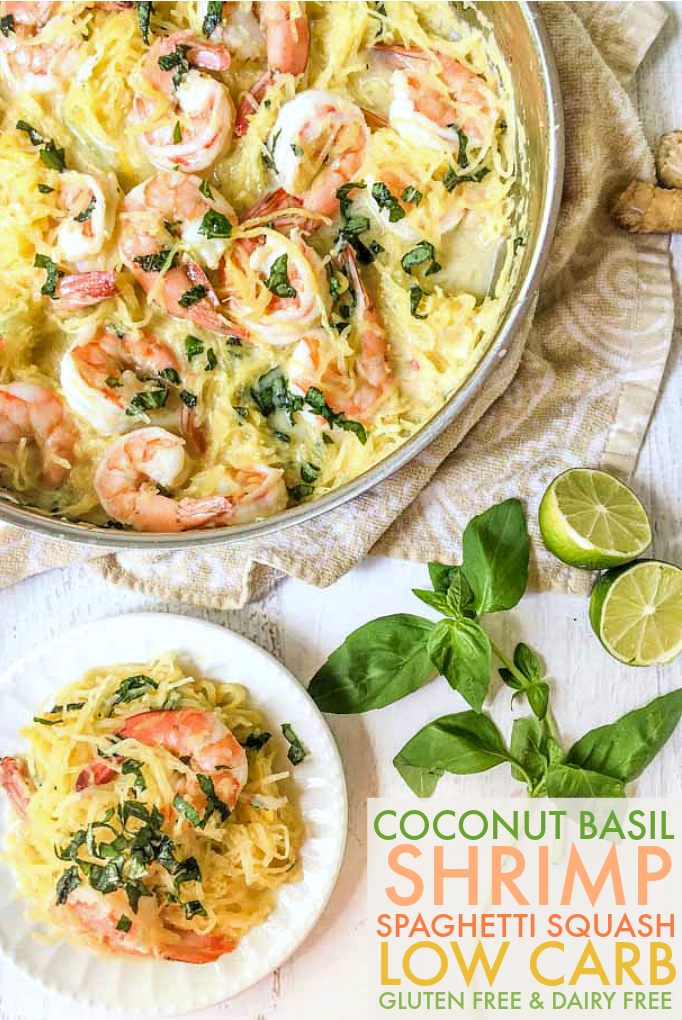 The flavors of coconut and fresh basil are what makes this shrimp spaghetti squash dish.

Because it’s a little bit of a pain to cook spaghetti squash try to make a double batch. That is why I used the Instant Pot and cooked 2 whole squashes.  It will keep in the fridge for a few days and is great to stir fry with a bit of butter, garlic or herbs.

Or recently I made a low carb linguine salad that I will post next week. It was awesome! 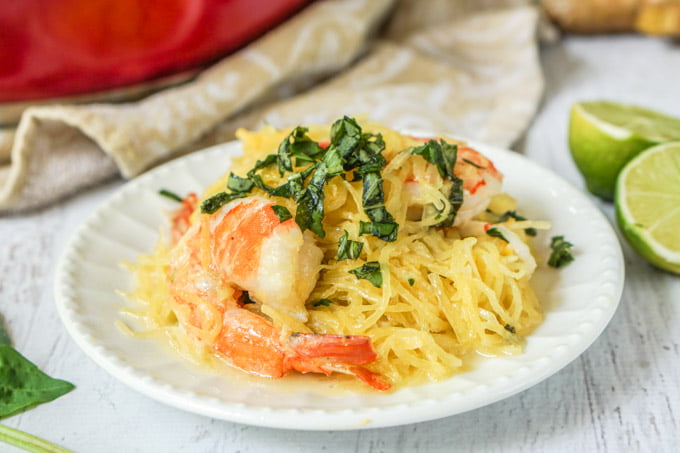 If you have never tried spaghetti squash I highly recommend it. It doesn’t not taste just like pasta because it’s crunchy. However it’s stringy texture reminds you of pasta so if you use a good sauce it makes for a great gluten free and low carb pasta substitute. 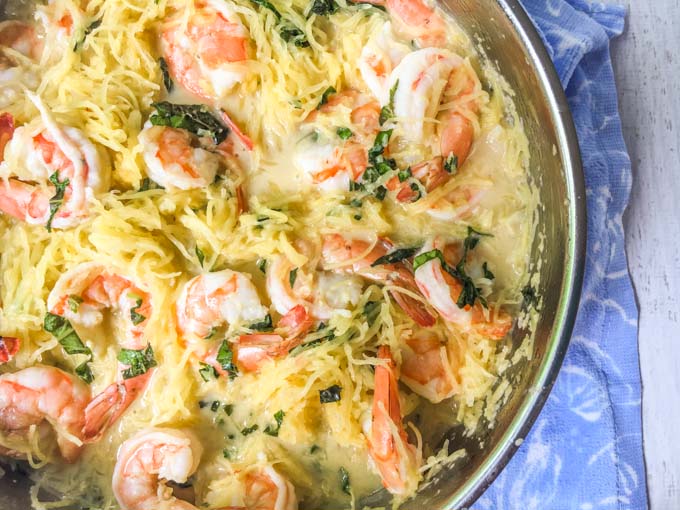 You can make this low carb dinner in less than 20 minutes!

This is a very simple recipe and should only take about 20 minutes tops.

You start by heating up a little coconut oil and sautéing some ginger and garlic until fragrant. Then add in the shrimp. Toss it around in the spices and oil for a minute or two and then add in the coconut milk, spaghetti squash and half of the basil.

Stir until the shrimp turns pink and cooks through. Then take it off the stove, add the lime and the rest of the basil and mix through. Thats all folks! 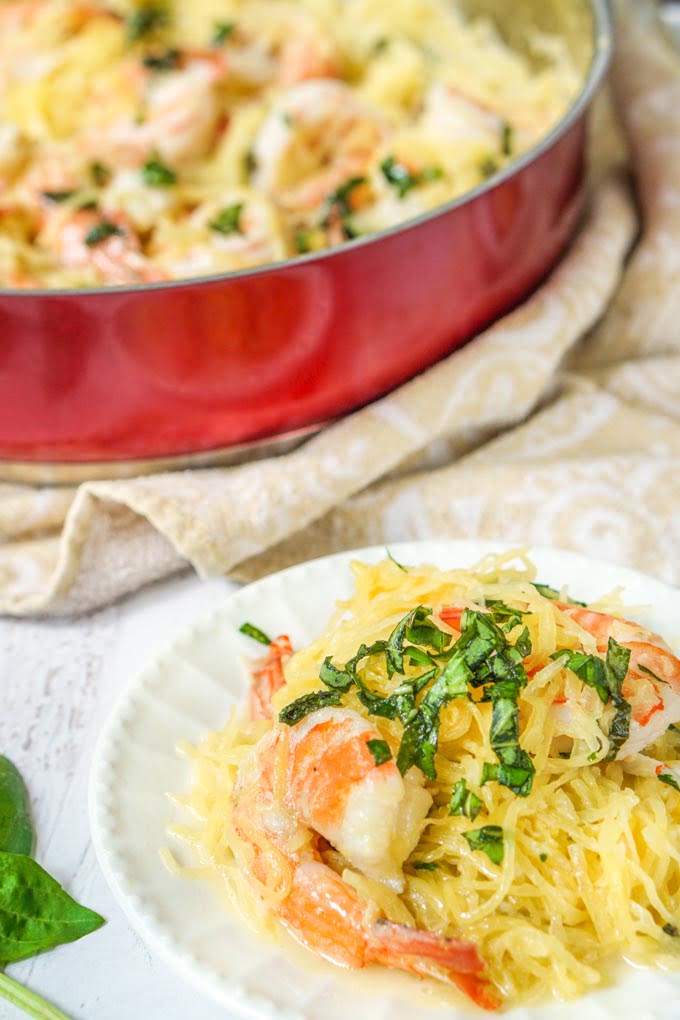 Lately I’ve been buying this Aroy-D coconut milk online because it’s low in carbs but today I used Trader Joe’s organic coconut milk. I noticed that it was sweeter but still low in carbs so it worked well in this dish.

I’ll have to try again with the Aroy-D and see if there is any difference in flavor. The nutritional information for one serving is:

The nutritional information for one serving is: