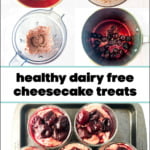 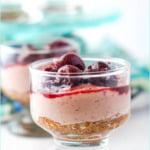 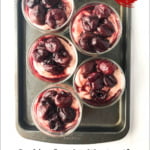 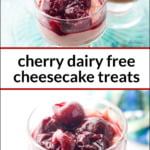 These little dairy free cheesecake treats are full of cherry and coconut flavors and make for a healthy dessert. They are dairy free, gluten free, no bake and easily made vegan.

I crave sweets all the time and am constantly looking for a healthier option for me and my family. I learned how to make vegan cream cheese with cashews last year and thought it was the coolest thing.

So I thought I would treat myself to a Cherry Cashew Cheesecake this weekend and try to eliminate the dairy from the recipe. It turned out great!

This dairy free cheesecake is no bake, gluten free and Paleo. It has a creamy filling with coconut and cherry flavors made from cashew cream cheese. Then there is a nut crust and cherry topping.

Is This No Bake Dessert Vegan?

Also ghee is not technically dairy free but it is lactose free so this recipe show be fine for those who cannot tolerate dairy. And again you can easily substitute coconut oil for the ghee.

If you don’t like the flavor of coconut oil which I used in both the filling and crust, you can try a good quality refined coconut oil like this.

If you scroll down you can see the Recipe Tips and Notes section for substitutions. Again if you have issues with ghee, just use coconut oil. Also if you don’t want to use sweetener you can just use coconut sugar instead.

This dessert is not hard to make and there is no baking. Yay! However it does takes some timing. Below I’ve tried to show you how to make this in the right order also you can see the pic above for what the different components look like.

That’s all there is to it. You will want to refrigerate these before eating so that the cream mixture will set up.

I hope you enjoy these dairy free cheesecake treats. That cashew cream cheese is awesome and I think this recipe will work well with many flavor combinations. Let me know what you think about it, in the comments below.

I’m most a low carb blogger so I have many low carb cheesecake recipes on this blog. My favorites are these super easy lemon cheesecake, peanut butter cheesecake and lemon strawberry cheesecake treats.