These low carb taco cups are so easy to make that you can eat them for lunch, as a snack or serve as a low carb appetizer. Each taco cup only has 1.8g net carbs!

Oh the things you can do with cheese! Every once in awhile I’ll make some cheese chips in the microwave and I’ve seen people make taco shells too. So today I thought I’d make these low carb taco cups using cheese as the cup, similar to the cheese taco shell idea. It turned out great and was so easy to make. I actually ate these for dinner but I think they would be a great low carb snack or low carb appetizer. Each serving is only 1.8g net carb and they are pretty filling! 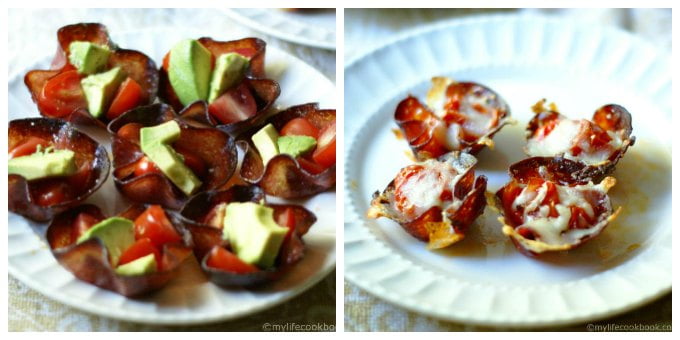 It Started With Salami & Pepperoni Cups

A long time ago I made a two snacks that are similar in concept to this one. For the salami one, I used salami slices and added avocado and tomatoes to it and it was delicious. I did one with pepperoni  too. I baked the pepperoni cup and added sauteed tomatoes in the middle and topped with cheese.  They are not the prettiest things but they are very tasty so give those a try for a low carb snack.

These are very simple to make. I used a silicone mat so they would be easy to pull off but you can use parchment paper if you wish. Just add a heaping tablespoon of shredded cheddar cheese and bake in a 350 degree oven for about 8 minutes. I also tried mozzarella but it didn’t have as much taste to me. It worked out find texture wise though.

Below you can see what they look like once they are melted. Once the melted cheese cooled for a few minutes, place them inside a mini muffin tin and shape into a cup.

Leave the cheese cups in the muffin tins so they are easy to fill and they keep their shape. Now let’s fill them up!

The first thing you want to do is get your taco meat going. You only need ½ of lb of the taco meat but I suggest doubling the meat and using it for a taco salad, but that’s just me. So make your taco meat as you normally would by following the instructions on the seasoning packet. You can cut a few carbs by making your own and I have in this taco burger recipe here. I was in a hurry so I just used the mix.

While the meat is browning, make your cheese taco cups and chop your toppings. I used a cup of ripe tomatoes, a half of an avocado and some sour cream. You can try other things like shredded lettuce, jalapeno peppers, cilantro, sweet peppers, etc. I actually made these on a whim so I used what I had on hand.

Some Notes About These Low Carb Taco Cups

I would definitely make these low carb taco cups again and experiment with what I put in them. The cheese aspect of the cups are just as good  as the salami and pepperoni cups. I will have to post my next creation when I do make them. The nutritional information for 1 taco cup is: 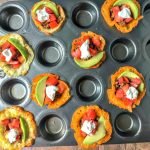 These low carb taco cups are so easy to make that you can eat them for lunch, as a snack or serve as a low carb appetizer. Each taco cup only has 1.8g net carbs!

Add this recipe to your Mix!

Check Out The New Ebook!