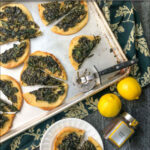 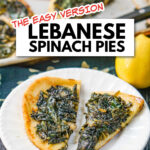 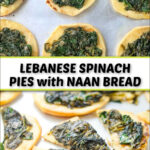 If you love the taste of Lebanese spinach pies but want an easier option, try this recipe. It uses the same filling mixture but is more of an open faced spinach pie and you don’t need to make any dough! Great for a quick Middle Eastern lunch or light dinner on a busy weeknight. They also make a delicious snack.

I grew up with a Lebanese grandma who was the best cook! Even luckier my mom learned how to cook her recipes and master them. So for many years I took for granted all that delicious Middle eastern food in my life.

Today’s challenge was these easy Lebanese spinach pies (spinach fatayer). I found my mom’s recipe and made the spinach filling the same as her but I didn’t make the homemade dough. I used small naan bread I buy at Aldi and they were great! The spinach filling is mix of spinach, caramelized onions and lemon. It’s super flavorful and the naan has the same flavor as her homemade dough.

The only problem was that I had to make these open faced instead of the traditional triangular shape pie. But it was easy because no dough means no flour, yeast, kneading nor raising. And they were very tasty so I’m ok with that.

Fatayer is a Middle Eastern meat pie that is can also be filled with spinach or feta cheese. When my mother made these it was time consuming. She used to make her own dough mixture, cut small flat circles, add the filling and fold up the sides.

Then she’d pinch them shut to form triangle shape and bake them. This recipe has the same taste but takes less than 30 minutes because we are using already made naan bread.

I only used a few simple ingredients to make these spinach pies – fresh spinach, yellow onion, green onion, salt, black pepper, ground sumac, fresh lemon juice and olive oil. My mom used to use frozen spinach but I only had fresh baby spinach on hand so used that.

If you want to use frozen spinach substitute ½ of a 10 ounce package for the fresh. Thaw first then place it in a clean kitchen towel and wring out the excess water. The makes the spinach dry and you can then add it to the pan.

Sumac is an usual spice and may be hard to find. It’s made from dark red sumac berries. It’s bright, tart and lemony and often used in Middle Eastern cooking. If you can find it and like Lebanese dishes it is worth getting but if not you can substitute with maybe a teaspoon of vinegar. (Learn more about sumac substitutes.)

How to make this easy version of Lebanese spinach pies.

The filling takes just about 5-10 minutes to make and you bake the pies for about 15 minutes so you can be done in 20-25 minutes!

When you get them out of the oven they should look like they do below. They would be better if they were in the little triangle shape pies to keep the filling in but as I mentioned above the flavor is spot on and much easier.

My husband loved these and I was surprised to be honest. You want to store leftovers in an airtight container or cover the baking sheet with plastic wrap and store in the refrigerator. Just heat up for a 30 seconds in the microwave to reheat.

Please scroll down to view the recipe card.

Another variation of the filling.

My mother played around with add raisins in the filling. It gives it a bit of sweetness to counterbalance the tartness of the lemony spinach. If you wanted to try that, start with just ¼ cup of raisins and add them when you are cooking the onions. They will get soft and taste better.

I’ve also heard of adding pomegranate seeds though I have never tried them. They would look pretty though!

As I mentioned above these are my easier options of my mom’s Middle Eastern recipes but they are all really tasty so give them a try! Note some of them are low carb because I mostly cook low carb recipes.

I’m not going to lie. I was super pleased with these Lebanese spinach pies. It’s the perfect snack or light meal when I’m craving Middle Eastern food. Next up grape leaves and kibbeh! Hope you like these as much as I did.

If you want to use frozen spinach substitute ½ of a 10 ounce package for the fresh. Thaw first then place it in a clean kitchen towel and wring out the excess water. The makes the spinach dry and you can then add it to the pan.