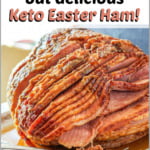 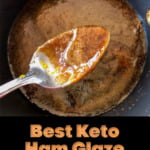 If you’d like to make a tasty ham for the Easter or any holiday meal, you have to try this brown sugar & spice keto ham glaze. This glaze is a nice mixture of brown sugar, orange flavors and spices which goes perfectly with roasted ham. It is low carb, sugar free and the whole batch has only 6 calories and 0.9g net carbs! So next time you make a glazed ham, try this sweet & spicy keto version.

I made our Easter ham early this year because we had planned to travel on Easter Day. Well that all changed but I did come up with a mighty tasty sugar free keto ham glaze!

I asked my husband what flavors he liked in a glazed ham and he said he loved spices like cloves. So I added some brown sugar and orange flavors to the cloves and this keto baked ham was a bit hit.

I was excited because this was the first time I made my own glaze. The whole batch has only 6 calories and 0.9g net carbs so you can’t beat that!

Making A Keto Glazed Ham
Recipe In A Nutshell.

This glaze has that brown sugar sweetness with the orange and spice flavors. Once you make this, which will only take 5 minutes, you can add more orange or pumpkin spice flavors to your liking.

Note you could also use other sweeteners instead of Swerve brown sugar. Lakanto golden monk fruit sweetener has a brown sugar flavor and it would work well too.

Making The Glaze On The Stove.

When you have 30 minutes left for your ham to bake, quickly mix together the glaze ingredients on the stove. You can see what it looks like below. You want all the sugar to melt and get sticky. Note though you don’t want to do this at the beginning because the sugar will get too hard so do it in the last 30 minutes of baking.

Use a brush and apply the glaze all over the ham. Depending on the size of your ham you may have too much but I had a 9-10 lb bone-in spiral ham from Aldi. That should give you some idea to compare with.

Once you apply the glaze, put it back in the oven for the last 30 minutes. Hurry and soak your pan because the sugar can get hard and difficult to clean.

Side Dish Keto Recipes
To Serve With Ham.

My family loves scalloped potatoes with ham so now I make this rich and oh so delicious keto scalloped cauliflower casserole. Another dish like this is my individual keto scalloped turnips stacks. They taste so much like potatoes!

Along those dishes are so rich and tasty, I would then just serve a steamed green vegetable like broccoli or green beans and add a little butter and salt when they are done cooking.

I think this was one of the best hams we have ever had and since we will be home for Easter now, we will have it again!  Even if you are not on a low carb diet, I know your family will love this brown sugar & spice glazed ham.

For a great side dish, try my friend Taryn’s keto creamed spinach!

The nutritional information for all of the glaze is: