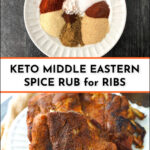 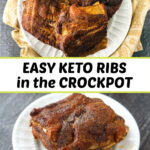 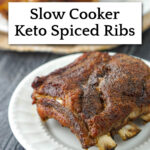 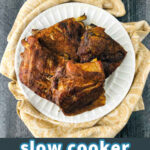 These slow cooker keto ribs are so easy to make and delicious with the unique spice blend. The slow cooked ribs are moist and tender and the spice rub is full of Middle Eastern flavors. A tasty change to your usual bbq ribs and they are low carb too! Only 1.7g net carbs per serving.

Check out this low carb Middle Eastern Spiced roast in the Instant Pot.

I really didn’t know what to call these. The other day I bought a huge package of ribs from Costco and wanted to make low carb ribs. I intended to create my own rub and wanted to slow cook them. I had planned on adding barbecue sauce at the end for my husband but when I tasted them they were really good as is.

They reminded me of various dishes my Lebanese grandmother used to make. I could have called them Grandma’s Ribs but since she never made ribs that I know of I decided to call them Middle Eastern Slow Cooker Keto Ribs. They were TASTY and only 1.7g net carbs per serving!

My husband really liked these. I think because they have such an unique taste. And when you make them in the slow cooker, you are guaranteed that they will be nice and tender.

I much prefer cooking a rack of ribs this way compared to an oven cooking method. However I have also made ribs easily in the air fryer so check that out too!

The rub is made up of a great deal of spices but they are pretty commonly found. I used cumin, garlic powder, onion powder, paprika, cayenne, chili powder, cinnamon, salt, pepper and Swerve sweetener.

I think what gives it that certain Middle Eastern taste is the cinnamon. In combination with the other spices it’s delicious with meat. Recently I just used this to make an Instant Pot roast and it was fabulous!

Note I used both baby back ribs and St. Louis ribs so you can use either kind with this slow cooker recipe.

Make sure to remove the membrane on the ribs, though sometimes they come with it removed already. If you are unsure scroll down to the recipe tips and notes for a link to a video showing you how.

Step 1: First mix the all of the spices in a small bowl. I used Swerve sweetener because I didn’t want the extra carbs. You can most certainly use sugar and it would be the same amount as the Swerve.

Step 2: Cut the rack of ribs into sections. Rub the spices generously on both sides to get the ribs ready for the slow cooker

Step 3: Place them into the slow cooker pot and cook on low all day, about 6-8 hours. No water or liquid of any kind needed. Cooking time may vary.

Step 4: You know they are done if they fall off the bone. If you like them chewier take them out earlier. Discard the cooking liquid and place on a platter to eat.

Store leftover ribs in an airtight container. (Please scroll down to view the printable recipe card.)

That’s all there is to these easy slow cooker keto ribs. I think if my grandma was alive she would approve of these ribs. I hope you give this low carb dinner a try and here is the nutritional count for 1 serving (½ lb):

If you love the flavors of Middle Eastern cooking I think you will enjoy these 4 recipes below. They are not traditional Middle Eastern dishes but my take on them.