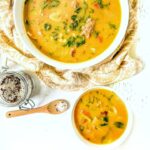 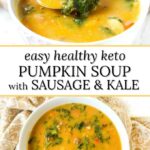 This delicious creamy keto pumpkin soup gets it’s creaminess from a cauliflower puree and pumpkin. The savory sausage and kale make for a delicious and healthy, low carb comforting soup. Only 5.7g net carbs per serving.

So it’s that time of year when everything seems to be about pumpkin. The thing that I’ve learned about pumpkin is that it tastes great in soup. It adds a bit of of sweetness and lots of creaminess so I’m a big fan.

Recently I updated this creamy keto pumpkin soup recipe to make it more low carb. It’s actually a creamy version of a much older pumpkin, sausage and kale soup recipe. I used cauliflower cream to make this a healthy creamy pumpkin soup with only 5.7g net carbs per serving!

The Paleo version of this soup.

Below is a photo of the older Paleo pumpkin soup with sausage and kale. This was one of my oldest recipes back when I used to make more Paleo recipes compared to my low carb recipes now.

You can see see below that it’s a bit thinner but it’s still very tasty. As I mentioned before the pumpkin gives it a bit of creaminess but I wanted more creaminess so I added the cauliflower cream and tweaked the ingredients to make it low carb.

If you don’t want to go the extra step of the cauliflower puree you’ll still have a fabulous soup so try that post.

And here is a photo of the soup with the cauliflower puree. You can see that it’s lighter in color and it’s thicker too. You also get the benefit of adding more veggies to your soup and the extra nutrition cauliflower offers. And once again I have to recommend using Better than Bouillon as it adds so much flavor.

Step 1: The first thing you want to do is get the cauliflower cream started. Add the cauliflower to a microwave steamer pot or baking dish with a tablespoon of water and cook for 10 minutes or so until fork tender.

Then add it to a high speed blender with ½ cup water and the butter. Blend until nice and creamy. I should look like the picture below.

Step 2: While the cauliflower is cooking in the microwave, brown the sausage, peppers and mushrooms. I just take the casings off of the sausage and break it up into bite size pieces.

Step 3: Once the sausage is brown, add in the pumpkin, spices, water, Better than Bouillon and kale.

Step 4: Cover and cook for about 5 more minutes. Make sure to chop the kale into small pieces because you want the kale to soften in 5 minutes.

Step 5: And now you add in the cauliflower cream sauce. Mix it well and let it simmer for 5 more minutes to let the flavors meld together. (Please scroll down to view and print the recipe card.)

So this is my new and improved creamy keto pumpkin soup. I personally really like it with the cauliflower puree. I like creamy soups and I can eat this for a meal and be totally satisfied.

The nutrtional information for 1 serving is: