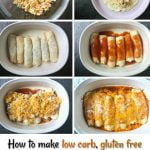 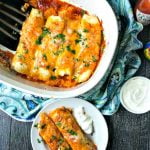 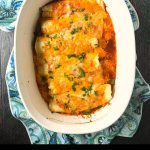 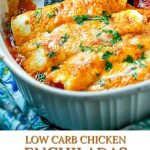 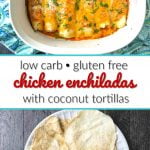 You don’t have to miss out on Mexican food when on a keto diet. Try this easy and delicious low carb chicken enchiladas recipe. It uses a basic coconut tortillas recipe and is stuffed with chicken, cheese and spices. Best of all each keto chicken enchilada has only 3.1g net carbs!

I used low carb coconut tortillas from an older recipe and stuffed it with chicken, cheese and spices. They came out so good  I wish I had made more and frozen them. Oh well I’ll just have to make them again. And each enchilada has only 3.1g net carbs.

My family really loves mexican food so whether you are looking for a low carb burrito bowl or a bowl of easy taco soup I have it for you on this blog.

When making Mexican food at home, stick to avocados, guacamole, vegetables, meats and cheese. You can also use a little of salsa and various Mexican sauces just check the labels and don’t use too much.

Oh and if you really miss black beans, try some canned black soy beans. They are low carb and high in protein and make a great substitute.

First you need to make your keto tortillas. All you need is coconut flour, egg whites, water, baking powder, salt and a little onion powder for flavor. You blend them together in the blender and let the mixture sit for 5 minutes so the coconut can hydrate.

Then get out two skillets and heat over medium heat. You want the first one to be about the same size as your tortilla so it should a small skillet. The other skillet should be a bit larger. Spray them both with cooking spray then pour about ¼ cup of the mixture into the smaller pan. Swirl the mixture so it fills the pan.

Once the edges are getting brown and the top is no longer shiny, loosen the edges with a spatula and carefully tip your pan over into the other plan to flip it. Let it cook there for a minute or so and then place in on a dish like the picture above.

You might have trouble with the first one but once you get the hang of it you will be fine. I got 7 tortillas out of this batch but only used 6 because one was not so great. Yes it was the first one. 😉

Once you have those coconut tortillas made, you can easily make the filling. Use cooked chopped chicken, dried minced onions, cumin, chili powder and pepper jack cheese. You use about 4 oz of shredded hot pepper cheese in total but use about ⅔ of it in the filling and the rest on top.

So take a spoonful or two of the mixture and place on the tortilla and roll it up. Place it in a sprayed baking dish seam side down. Do this with the rest of the enchilada and then cover them with ½ cup of canned enchilada sauce. Lastly sprinkle the remaining pepper jack cheese and some shredded cheddar cheese.

Bake for about 30 minutes in a 350°F oven until browned. You can sprinkle some chopped cilantro on top if you want a little color but it’s not necessary. I like to eat mine with a little sour cream on top too.

Well if you crave Mexican food I hope you give this recipe a try. These low carb chicken enchiladas are delicious and filling. Each enchilada has: