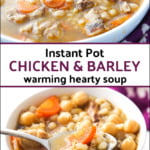 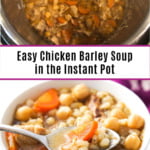 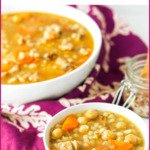 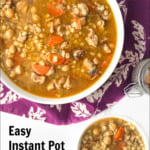 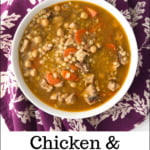 This easy Instant Pot chicken barley soup is full of flavor and makes a hearty, healthy meal. More like a stew, this barley soup uses spices like caraway and cinnamon to give it a uniquely delicious flavor and cooks perfectly in the pressure cooker.

Last week I made my hubby some beef barley soup in the Instant Pot and it cooked the barley perfectly. So I was trying to see what else I could make with barley and came up with this Instant Pot chicken barley soup.

It is so yummy. It has many of the flavors of moughrabia which is a Lebanese dish but I uses barley instead of pearl couscous. And it takes much less time because I used a pressure cooker.

My hubby really loved this soup recipe. It’s a change from your everyday soups and stews and its really filling and comforting meal!

There are a few ingredients but they all go together wonderfully to make this dish so it’s worth it.

That sounds like a lot of ingredients but you probably have many of them on hand. The only one I had trouble finding is caraway spice but I found it at a Fresh Thyme Market if you have one of those or you can get it online.

Also I only used carrots and onions in this recipe but you could use other vegetables like celery and mushrooms too if you wanted.

This soup is really very easy so here we go.

The best I can describe this dish is that it has what I would consider Moroccan flavors. The caraway, cinnamon and caramelized onions add a bit of sweetness.

The barley is like a chewy pasta and the chickpeas have a bit of nuttiness to them. And the broth is rich and flavorful and pulls it altogether.

The combination is warming and hearty. I could have easily called this a chicken barley stew. It definitely could be a dinner in a bowl kind of meal.

What if I don’t have an Instant Pot?

I would suggest you check out this similar recipe for Middle Eastern chicken & couscous soup which uses similar ingredients and is made on the stovetop. It uses rotisserie chicken and cooked couscous so it’s very quick to make.

Can I make substitutions?

You could use beef cubes and beef broth instead of chicken if you want. You can skip the chick peas if you don’t like them though they do add another texture to the recipe. However I would definitely use the same spices. That is the key to this dish. Here are a few caraway substitutes but they are just as exotic IMO.

Can I freeze this barley soup?

Absolutely. One caveat would be that the barley soaks up a lot of the broth but you can just add some broth to it when you heat it up.

I wish I would have made this earlier in the winter because it’s such a warming and hearty soup and makes a tasty dinner.

I hope you like this recipe as much as my hubby and I did. And if you have leftovers, this is a good soup to freeze. Also if you like chicken soups you will also love this chunky chicken noodle soup in the Instant Pot. Enjoy!