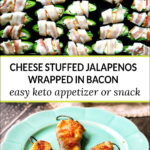 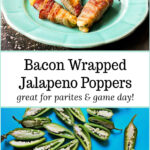 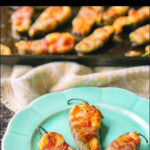 These keto bacon wrapped stuffed jalapeños are really easy to make with peppers from your garden. They make a delicious low carb appetizer or snack and are great for football parties. You can make them ahead of time and freeze to cook later. Each on has only 0.4g net carbs!

I might have mentioned that we had crazy amounts of peppers this summer. I mean tons and tons of peppers. One day my hubby brought in a bowl of jalapeños and we decided to stuff them with cheeses and wrap them in bacon.

I’ve never had a jalapeño popper but I’m guessing it’s similar to that??? Anyway we scarfed those suckers down quickly and I’ve been hooked ever since.

These bacon wrapped stuffed jalapeños only take a few minutes to prepare. Then you bake them so all that cheese melts, the peppers get soft and the bacon gets crisp. It’s the perfect combination.  And it’s low carb too with only 0.4g net carbs per serving.

I only used 4 simple ingredients and they were fresh jalapeños, shredded cheddar cheese, cream cheese and bacon slices.

You can use other kinds of shredded cheese if you prefer but keep the cream cheese to make it easier to eat.

Step 1: So the first thing you want to do is slice the jalapeño peppers in half. You have to clean out the seeds and the ribs so they won’t be hot. You still will get one or two that will be hot but for the most part this is not a hot dish. I like to slice mine in half and stuff them that way. It’s just a lot easier than stuffing from the top.

TIP: I used a melon ball scooper like this to get the seeds and ribs out. That’s where all the heat comes from. It seemed to be the perfect size for my peppers and made the cleaning really fast.

Step 2: Next mix the softened cream cheese and shredded cheddar cheese in a mixing bowl. If you cream cheese is hard, just microwave it for 30 seconds to soften it.

Step 3: Stuff each pepper half with the cheese mixture.

Step 4: Using center cut bacon I cut eat slice of bacon into fourths by cutting it first vertically in two long strips and then cutting those two strips in half horizontally. So you get 4 pepper halves wrapped with one piece of bacon.

Step 5: Spray a baking tray with nonstick cooking spray. Wrap the stuffed peppers with the bacon and keep the seam size down. The bacon will stretch a bit so try to make it as tight as possible and over lap a bit. Place on the baking sheet.

Step 6: Bake in a preheated 350°F oven for 15-20 minutes. You want both the peppers to be fork tender and the bacon to be crispy. If the peppers are cooked you can always place them under the broiler to get the bacon crispier.

If you want to make these ahead of time.

I made these also for a big family party I had for Max’s birthday. Since his party was in November, I made them a month earlier and froze them for the party.

All I did was prepare them on a cookie sheet as you can see above. Then I placed them in the freezer for 2 hours.

Once they are individually frozen, I put them in a freezer bag and popped them in the freezer.

On the day of the party, I just thawed them and cooked them normally and they were delicious.

Above is the finished product. If I were just making these for myself I would have cooked them longer. I like my bacon really crisp but no one else in my family does so the ones pictured below were more to my hubby’s liking.

This is a really tasty and easy appetizer for anyone but especially if you are on a low carb diet. I confess to have eaten these for lunch once. They were really good. Hope you like them too! The nutritional information for 1 is: