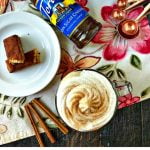 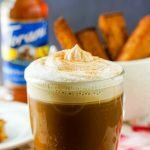 If you are looking for a sweet but low carb coffee drink you have to try this keto cinnamon toast butter coffee.  The richness of butter coffee is enhanced with the flavors of cinnamon & brown sugar to taste like cinnamon toast in a cup! Only 1.7g net carbs per serving. These recipes were sponsored by Torani. All opinions are my own. #flavorfall

School starts next week and it feels like summer is just about over. So my mind is starting to think of warming drinks and dishes to share with you. Today I have a keto cinnamon toast butter coffee that will knock your socks off!

It’s a rich butter coffee flavored with a brown sugar cinnamon syrup and topped with a flavored whip cream. Grab a couple keto biscotti for a morning treat without the guilt because this coffee drink has only 1.7g net carbs per serving!

What Is Butter Coffee?

Butter coffee is similar to bulletproof coffee that has become so popular with keto dieters. It’s basically black coffee with butter and MCT or coconut oil, blended together for a breakfast that is high in fat and low carbs.

Some keto dieters love butter coffee because they claim that it gives them mental and physical energy as well as suppressing hunger due to the high fat content. (Read more here.) It’s something that is definitely worth a try if you are a coffee drinker.

However this recipe uses butter more for taste rather than for dieting reasons. The butter combined with Torani sugar free brown sugar cinnamon syrup creates that cinnamon toast flavor that goes so well with the coffee.

You only need a few ingredients to make this fall coffee drink. The most important is the Torani Sugar Free Brown Sugar Cinnamon Syrup which I am happy to say that Walmart now carries! This flavor is great for low carb fall recipes so you will get a lot of use from it.

The other ingredients are black coffee of course, ground cinnamon, butter and heavy whipping cream. I also used a little Swerve sweetener to make the cinnamon sugar that I sprinkled on top.

Today I also made a flavored whipped cream for this drink. This is optional but I highly recommend it because it’s delicious!

Just add ¼ cup of the Torani sugar free brown sugar cinnamon syrup to 1 cup of heavy whipping cream and beat with a mixer until you have your whipped cream. This makes a lot so store the excess in the fridge for later.

To make the butter coffee, add a tablespoon of butter to your blender, along with a hot cup of coffee and two tablespoons of the Torani syrup. Blend for a minute to make it nice and frothy.

Pour it into a cup and top with the flavored whipped cream. Make the cinnamon sugar by mixing 1 teaspoon of cinnamon with 1 tablespoon of Swerve granular sweetener and then sprinkle a little of that on top. That’s all there is to it!

I don’t know about you but I’ve been drinking this for breakfast and in the afternoon. Unfortunately I have to have decaf in the afternoon but this cinnamon toast coffee tastes so good I don’t miss the caffeine!

So stop by your nearest Walmart and pick up a bottle of the Torani sugar free brown sugar cinnamon syrup. You’ll enjoy every last drop!

The nutrtional information for 1 serving is: