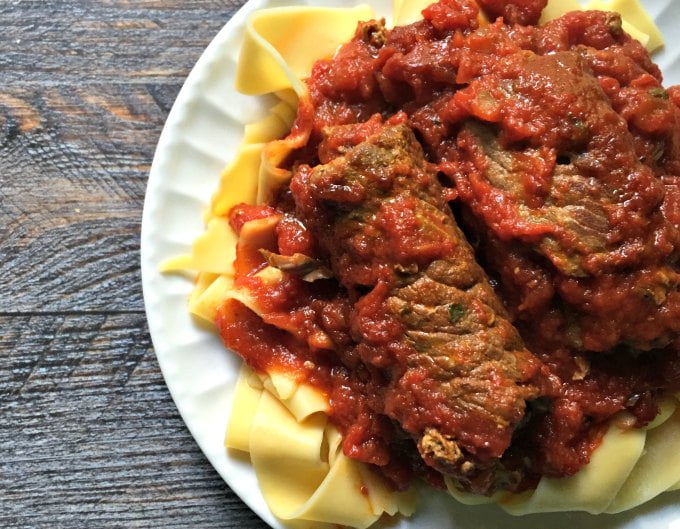 I recently saw a recipe for Skillet Braciole on my friend Christie’s blog, A Kitchen Hoor’s Adventures. It brought back memories of my mother (or was it my oldest sister?) who made braciole for us a long, long time ago. I remember I loved the garlic and cheese mixture that was rolled into the meat and the rich and tasty sauce. So today I wanted to make my own Paleo version – Paleo slow cooker braciole. I also wanted to make this beef braciole recipe in a slow cooker because so far this summer I am realizing that I no extra time at all. Using the slow cooker for this easy family meal can be a life saver.

This recipe is really very simple. I bought a package of very thin steaks at my grocer that was conveniently labeled braciole steaks and they were buy one get one free! They were already about ¼ inch thick so if you buy thicker meat, try to pound it out so it’s ¼ inch thick. I cut the large steaks into 9 small pieces. I had about 1 ½ lbs of meat to work with.

Next I made the filling. I just put the ingredients (almond flour, Parmesean cheese, parsley and garlic) in a food processor and pulsed until it was well mixed (see first picture above). Taking a piece of the cut meat, I brushed some olive oil on it first and then spread about 2 Tablespoons of the mixture all around. (see second picture above). I rolled up each piece of meat and put a toothpick in them to keep them together. 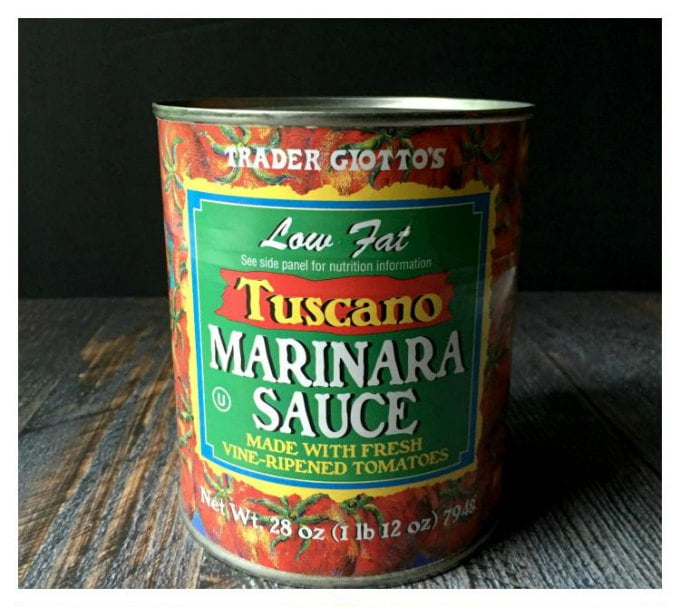 I took a shortcut and used two cans of Trader Joe’s Tuscano Marinara sauce. I’ve used it in my cheesy meatball stuffed peppers and easy zucchini lasagna soup.  The flavor of this sauce is fantastic and I highly recommend it but you can use any kind of pasta sauce you want. The meat will just add more flavor to it. 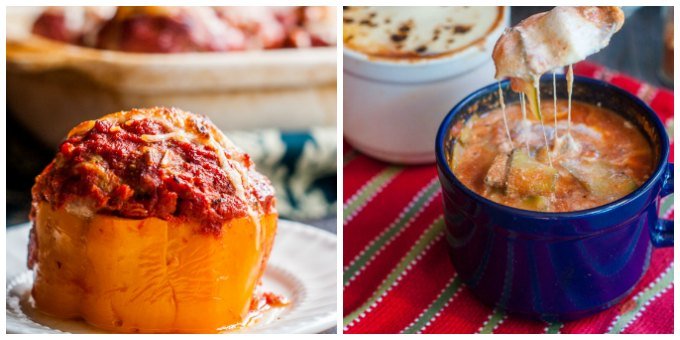 After browning the rolled up meat on both sides for about 4 minutes each (you have to take out the tooth picks to do this), I added them to my slow cooker along with the marinara sauce. I cooked them for about 8 hours on low but every slow cooker is different. The meat just fell apart when it was done and that’s the way I like it. You could probably do it in less time if you like. Just make sure the meat is done. 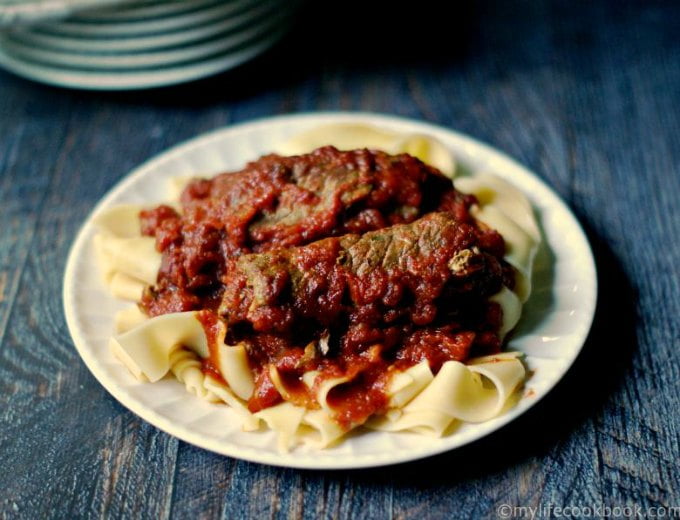 Then we served it over wide noodles for Max and my hubs. 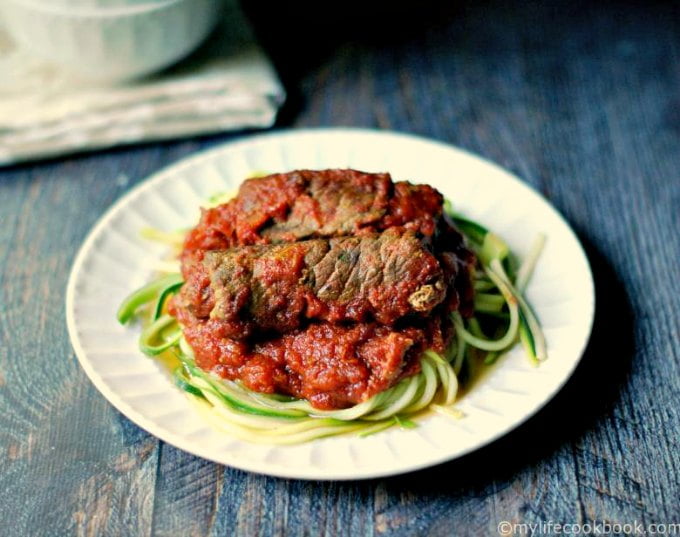 And over zoodles for me. So you can see we have a Paleo version of this meal (zoodles) and a traditional version (pasta). I just used almond flour instead of breadcrumbs and of course you can just use breadcrumbs if you like. My husband was very complimentary of this meal so I will definitely be making it again. Who doesn’t like compliments? 😉 I hope you will give it whirl and let me know what you think of it. 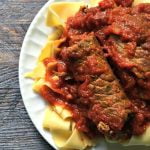 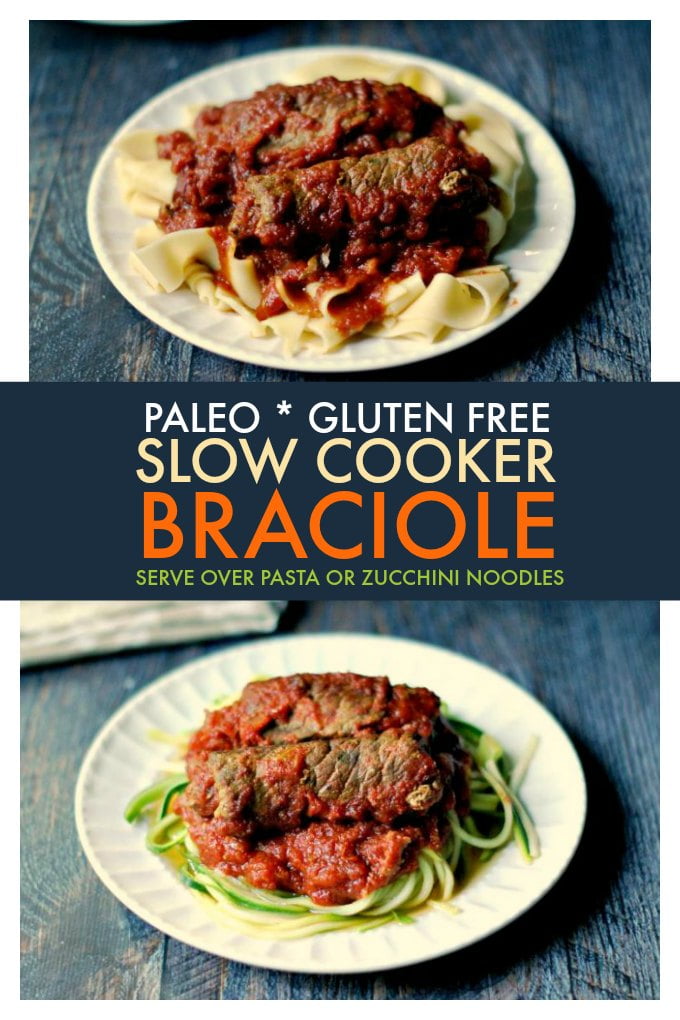